In March 2008 we bought our first set of solar panels. This kit included a Mastervolt Soladin 600 witch keep track 10 days. of profits. I read several good comments on the net and wanted something that logs data and the choice for me was a Soladin 600. The standard software of Mastervolt was nice but it could not satisfy me. Because of my experience with Visual Basic I decided to write a program, this time in Visual Basic.Net 2008. I had to relearn many things for the switch from VB6 to VB.Net is very large. But that's just the real challenge 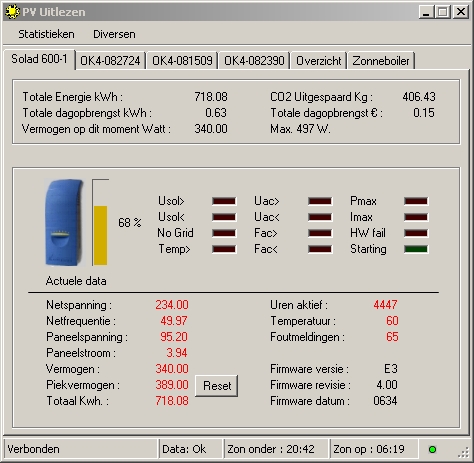 At first, I've just delved on how the view of my software had to be. After a long search, I came through an appropriate screen structure at tweakers.net  It looked nice however soon I got the idea to expand the screen with total revenue, saved costs and CO2 savings and a bar next to the inverter that shows the power in percentage. The beam fades from red to green if the yield is higher.

The Program can cummunicate with then Soladin through the TCP protocol, so I can read my system around the world via an Internet connection. I devised a Sollea EZL-400S bought at Antratek. I already bought a few things at Antratek and it never gave any problem to get them.

In order to limit the data streams, I made a solarposition module. After entering my coordinates, the program automatically calculates the sunset and rise of every day.
If the sun has set, the program assumes that the system is in sleep mode and it makes no contact with the Inverter.

If an error occurs with our PV system, the program shows the various error lights next to the image of the inverter. The program also keeps a list of the last 2000 error messages. 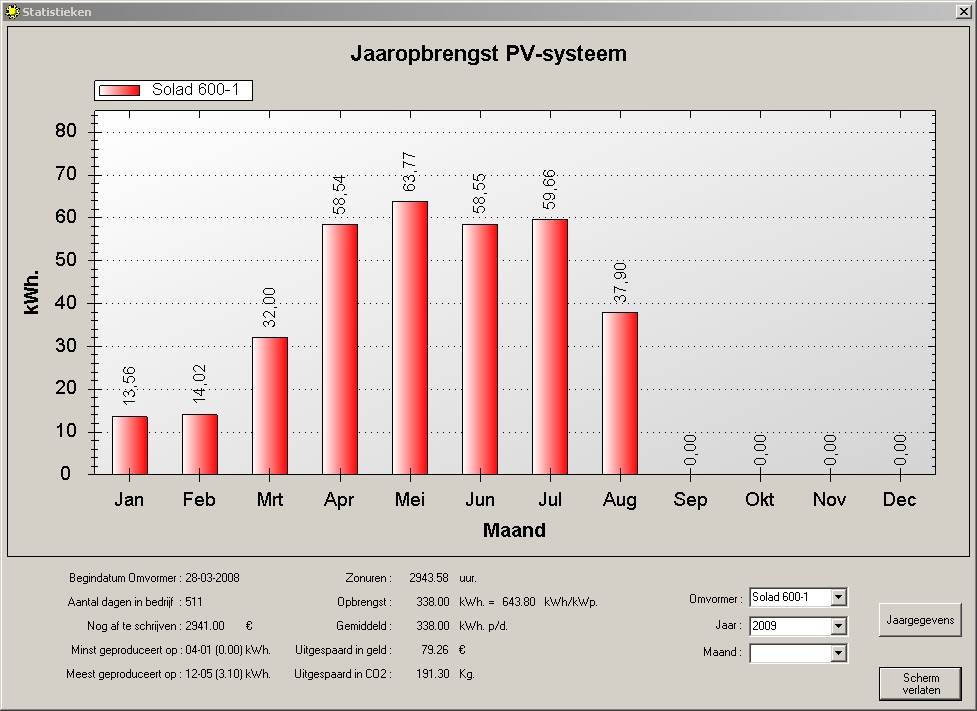 One thing leads to another. I want stats, so I decided to create a module where the annual income can be made visible. Eventually expanded to include monthly summaries and totals of all the converters that I own.

Because I manually keep track of my system on Solar-yield and they have the capability to automate this, I decided to do so. My information is automatically put on our site and sonnenertrag reads them every day. 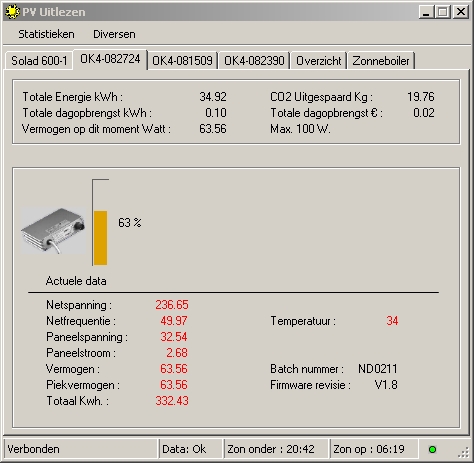 Above our door hung an ugly metal awning. This, I had the idea to replace it. On tweakers.net I saw that more and more people who hung over their front door solarpanels which served as shelter. Recently I bought 3 second hand Shell 100Wp panels with OK4 inverters  and hung them above the front door. OK4 inverters can also be read and so I had another excuse to expand my software. This had some impact because I have multiple inverters in a row to read. Statistics were more extensive, data of solar-yield got more complicated, etc.

To keep the overall picture is clear, I created a tab index of the totals.
There is also space for status and error messages. 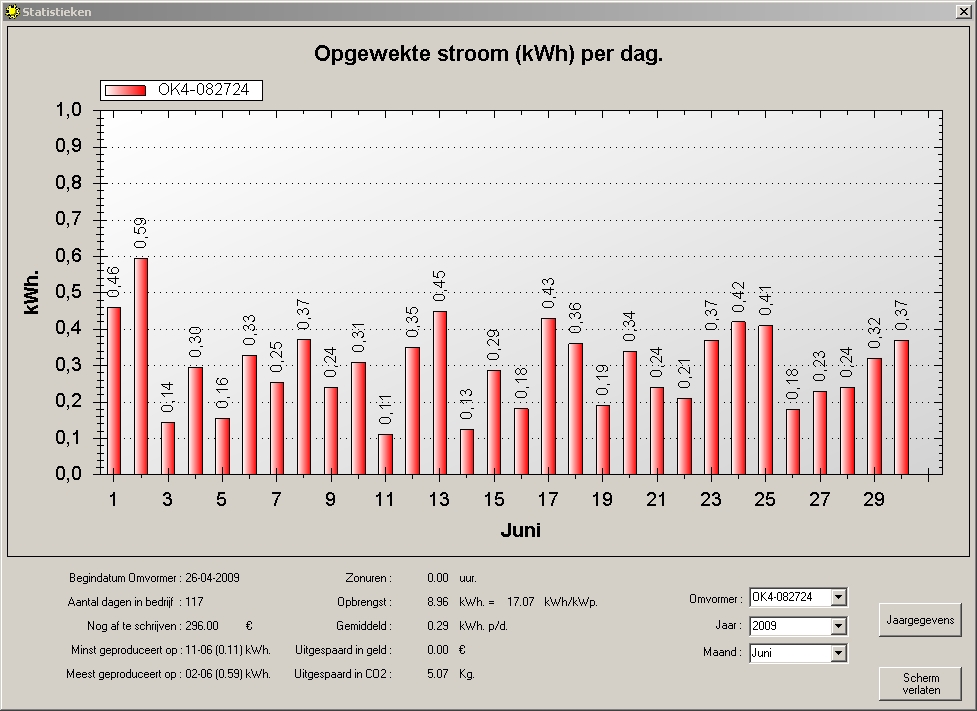 And a few pictures to make the whole ting complete. 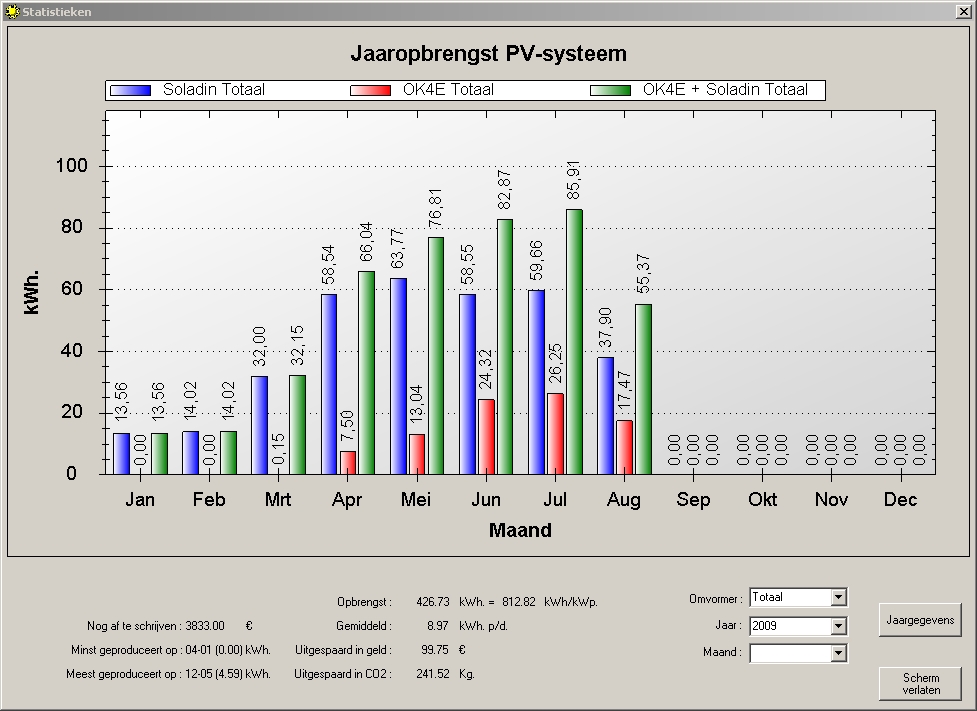 Meanwhile, the software evolved and now I support 4 languages, English, German, Catalan and Dutch. The program supports more Inverters. Phoenixtec, CHINT, Eaton, EL Schneider and Tress. And I have an LCD connected to the netbook. Because we want to see the afford of course. I chose a combination of a 4x40 LCD from Matrix Orbital, a Sollae RS-232 to Ethernet. This combination makes it possible to read the yields anywhere within and outside our home. Here are the pictures of the LCD in several languages.